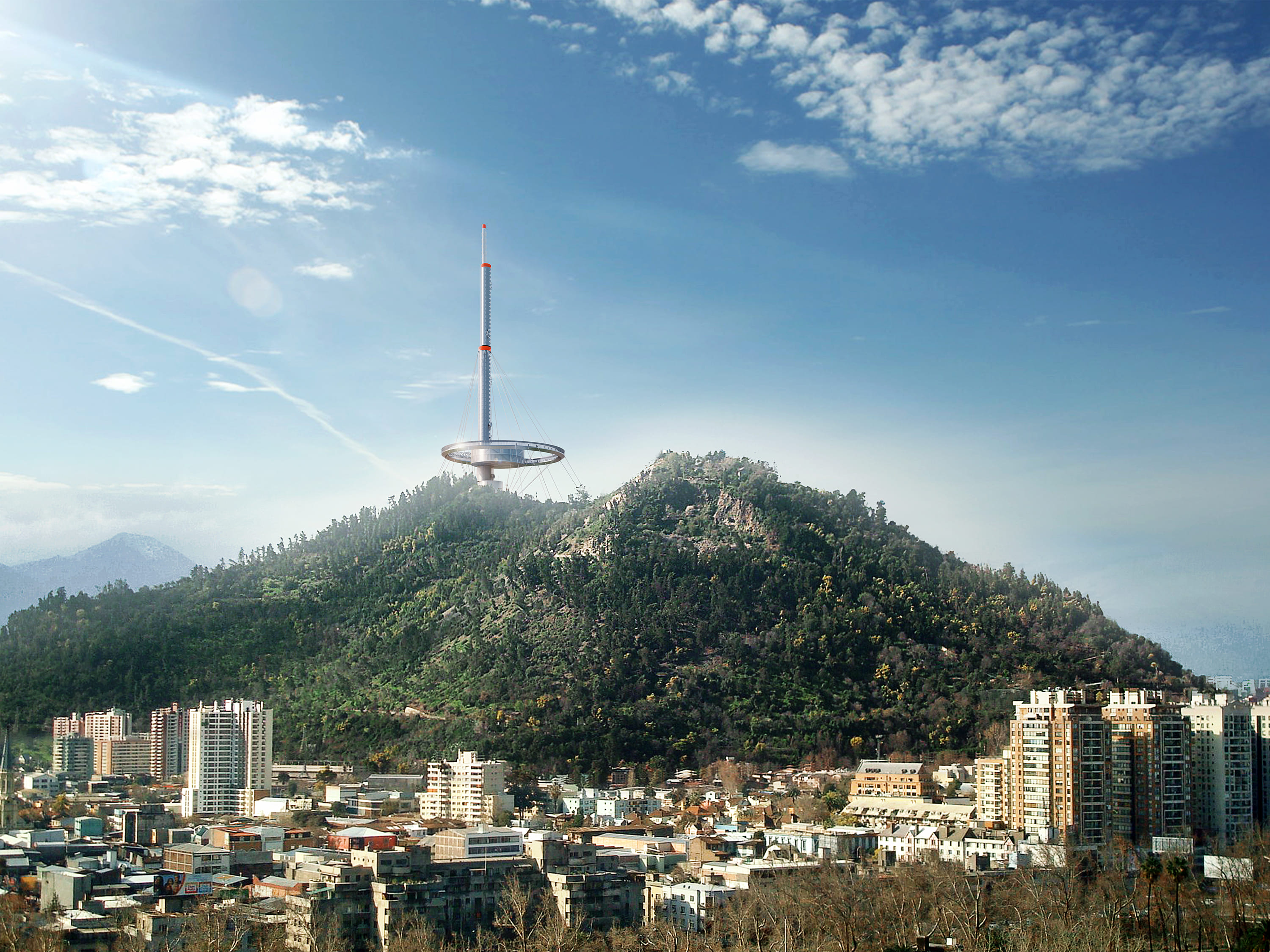 The concept of this tower suggests the volcano and optical phenomena such as the halo and the sun pillar. The ideas originate with the early modernists such as Rodchenko, Tatlin, Yakov Chernikhov and Malevich.

Chile has an enormous amount of active volcanoes and this tower evokes that seismic dynamism with its smoke plume vertical extension that seems to twist and rise. Likewise, the light emitted at night by the viewing platform is reminiscent of the wide glow from an active eruption. The evocation here is more about spreading than upward movement, such as a volcano does as it emits its fiery contents. The relationship of the tower to the statue of Saint Mary is important also in that the horizontal emphasis does not represent a dominating presence but rather a shared mountainous space. The mountain’s gentle slopes are resonant with the viewing platform’s disposition that erases a hierarchy along the skyline to Saint Mary.

The viewing platform also suggests an optical halo which seems to float in the sky, suspended only by cables. At night, the halo like shape hovers above the mountain peak with only a series of red lights shining above it. The halo has always been considered as a feature that highlights and inspires awe, in phenomena as far reaching as weather patterns, photography, painting, the physical sciences and religion.  This tower, with its strong and simple design is unlike any other tower in the world (see our scale comparison page for images of towers that correspond to it).

This presents a potential for iconicity in a global metropolis such as Santiago. The design also emphasises the structural ingenuity required for such a structure and which is very important in a seismic zone 9. Furthermore, the displacements of form and dynamism of the design make this tower very suitable for one of the toughest urban seismic territories on earth. The form also suggests diversity and unity at the same time. The shifting shapes along the vertical axis create a sort of tension, akin to Chile’s own cultural tension between its Incan and Mapuche cultural roots and later European connections. But the circle of the viewing platform is a uniting form too, cancelling the connotations of conquest and domination that vertical towers can suggest. The vertical projection demonstrates tension and dynamism and the lower halo form intimates inclusivity and circumspection. While a halo suggests sanctity in religion, it is essentially dualistic, also heavily represented in optical sciences. It generally refers to the phenomenon of light circular dispersal which of course refers us directly to the function of the structure as a center of signal emission. The circular form also echoes Chile’s beloved rodeo and such a prominent ring-shape on the city's skyline may suggest the Olympic logo, commending Santiago as a future host city for the sporting event.

The tower: The tower is organised as a vertical displacement of the programme emphasising its horizontality rather than verticality. Its homogenous materiality refers to its sculptural nature rather than simply suggesting its functional form it combines the motivations of both as a landmark form and a functional communication tower. Each programme is easily recognised by its shifted mass, allowing recognition of each point of utility. The significance of its form is dominated by a large 80 meter diameter ring hovering above the mountain peak. At night, the illuminated ring acts as a halo around the mountain peak, mitigating its functional significance with a subtle presence in the night time panorama.

Structural Philosophy: The proposed structural form pushes the boundaries of structural engineering by creating a hybrid reinforced concrete/steel tube with an array of steel and Kevlar guys to brace the slender tower.  The off center trussed ring creates an outdoor viewing platform whilst also creating an opportunity for small changes in guy direction to the ground level allowing the guys to be arranged so that certain cables are always in tension in a seismic event to provide resistance to the main tower core.

The site: The communication tower’s predominant form is oriented to the North-West on the axis of Zoologico Nacional de Chile, Santuario de la Inmaculada Concepcion and Square. There are five pedestrian and vehicle routes to the site (see below). The main car park space is located on South-East slope, around 100 meters below the main entrance offering a serpentine walkway up to the tower. The base of the mountain top is levelled following the contours of the mountain. The created surface is filled with a water reservoir. Access to the building is through a bridge over the reservoir. 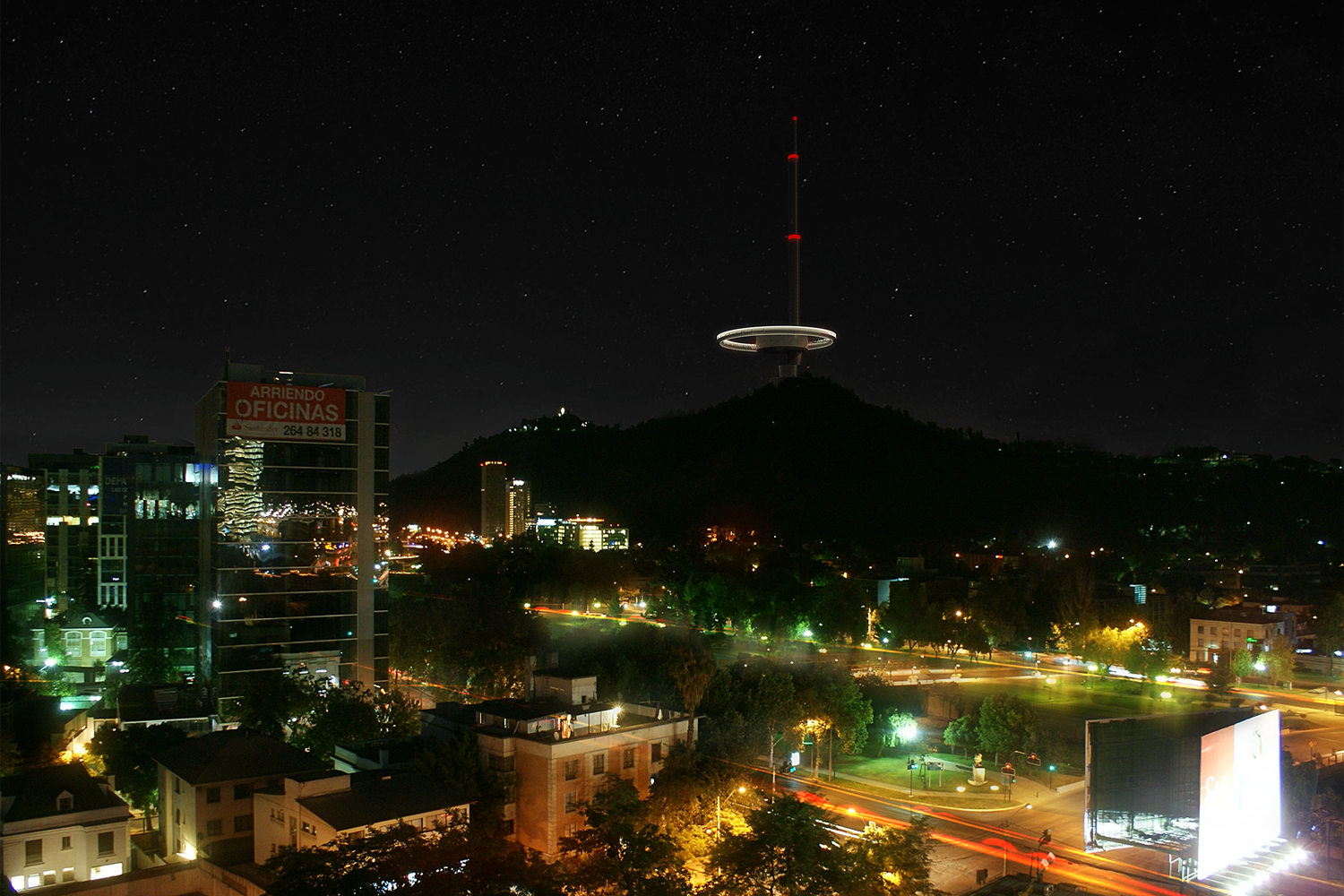 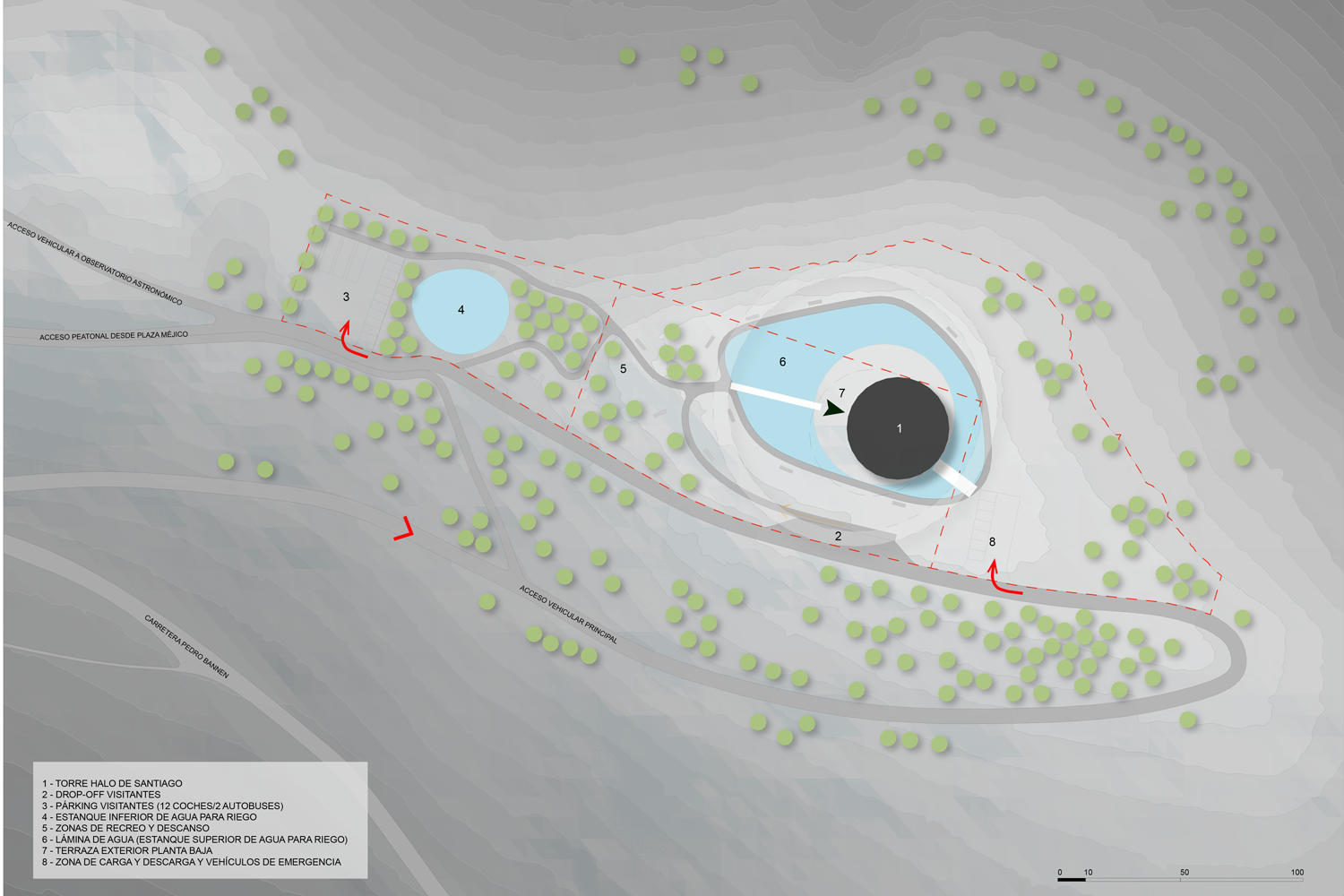 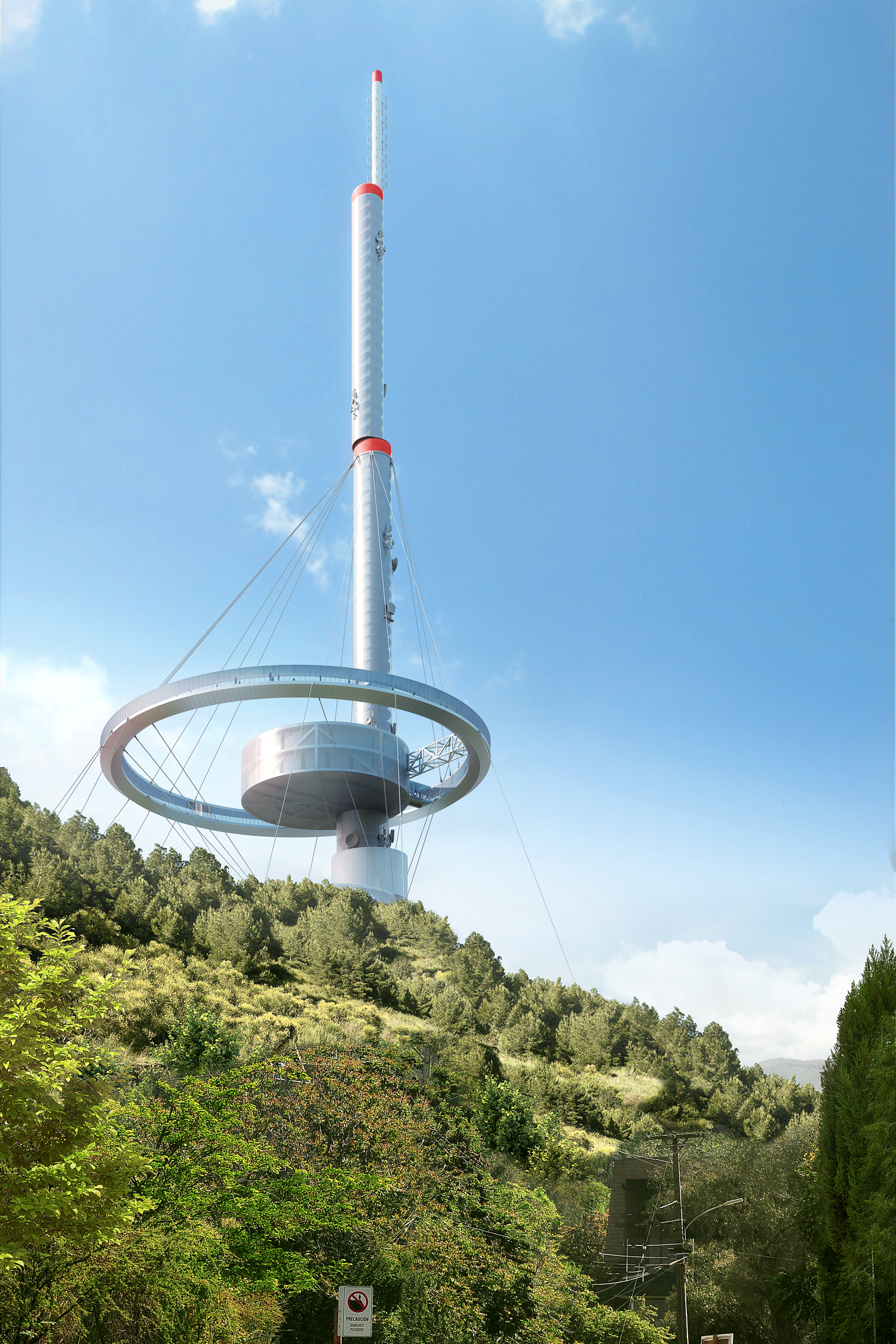 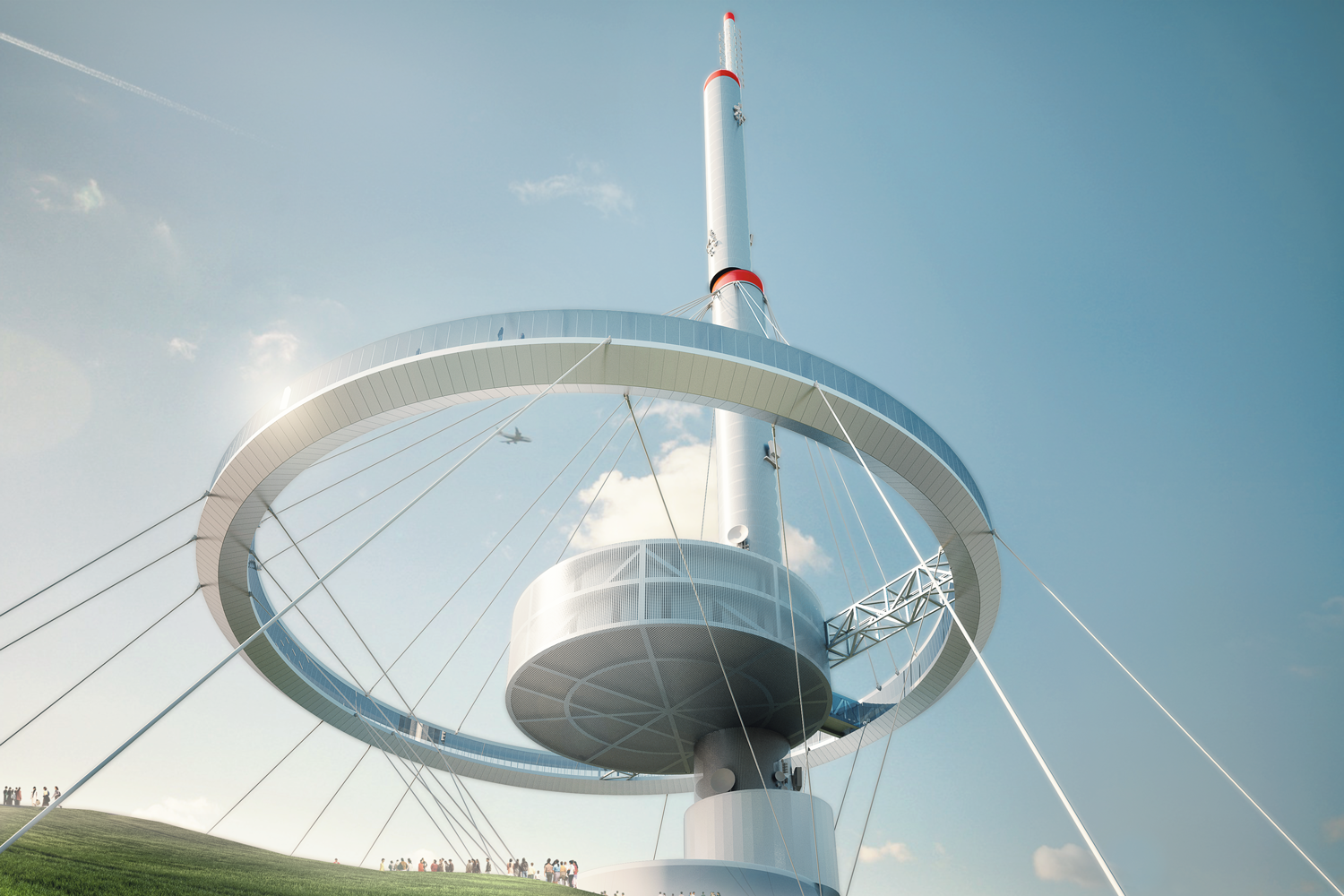 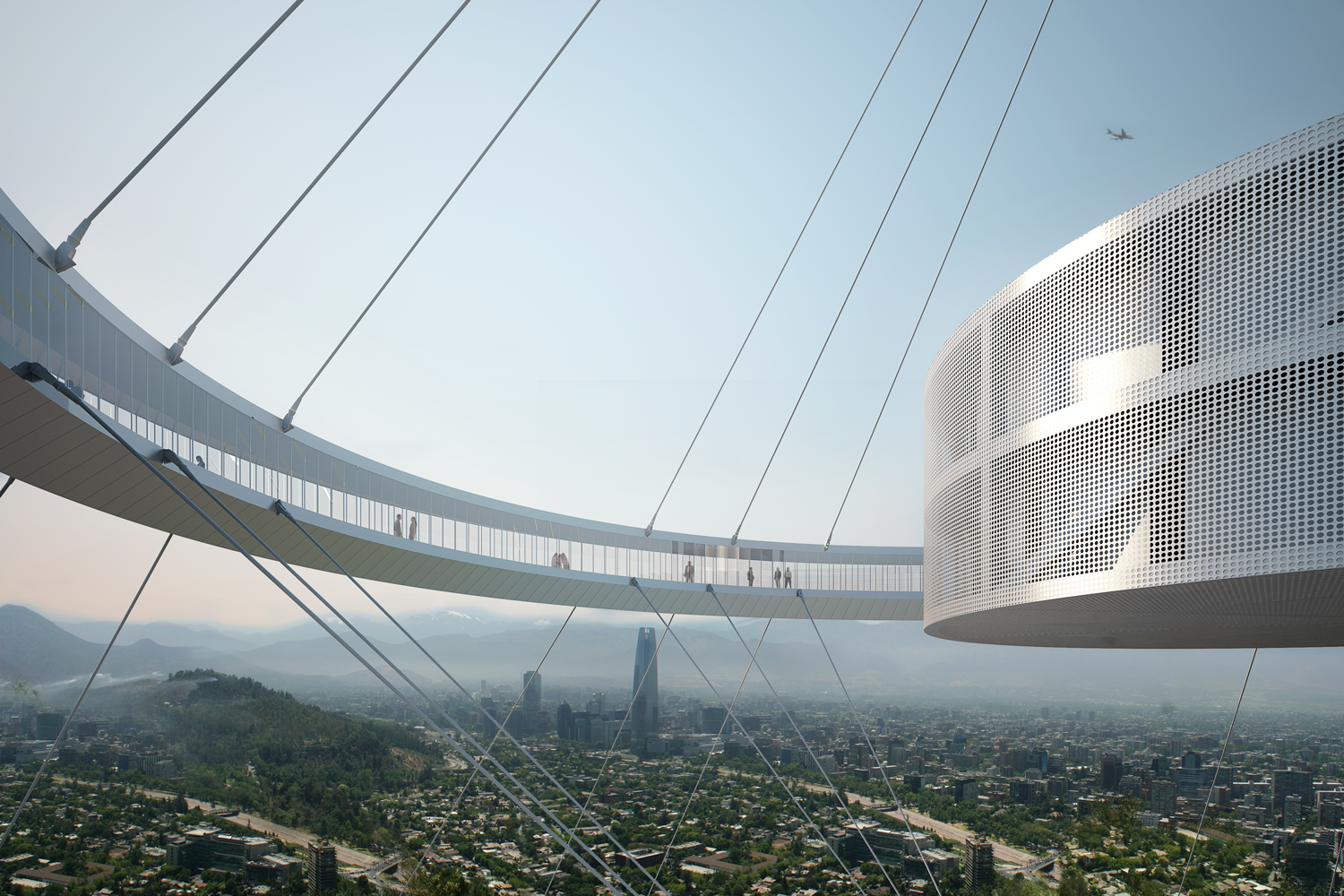 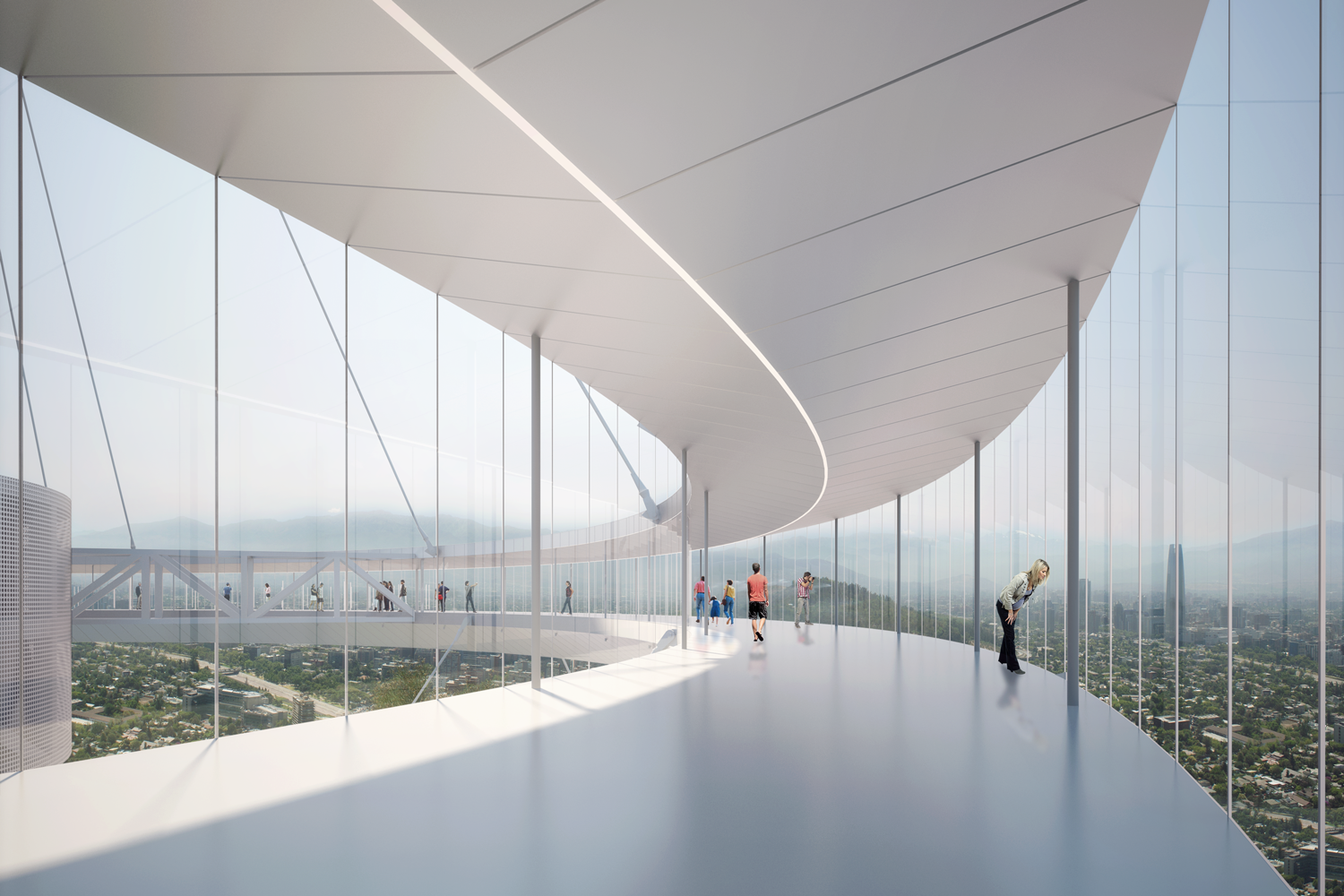 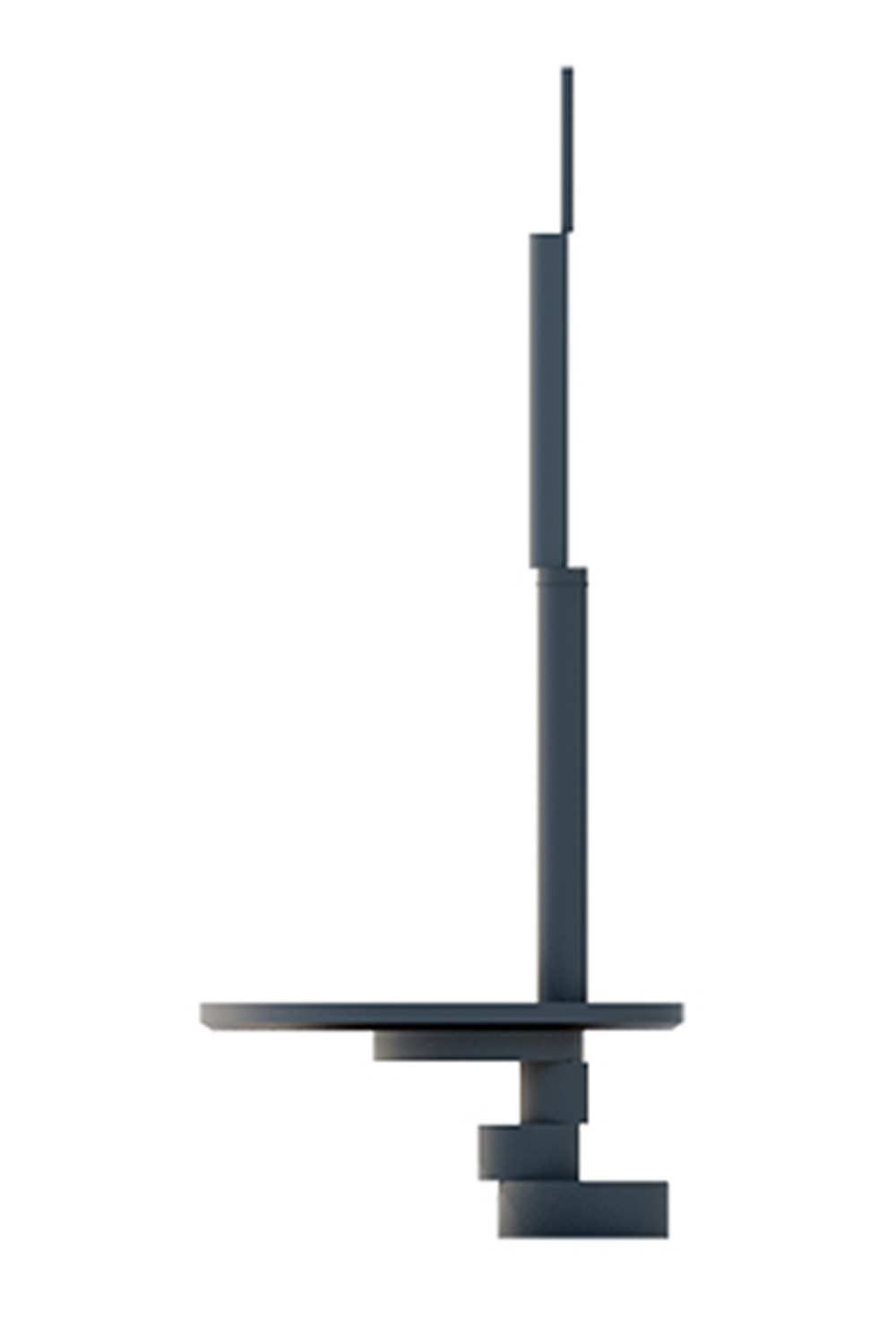 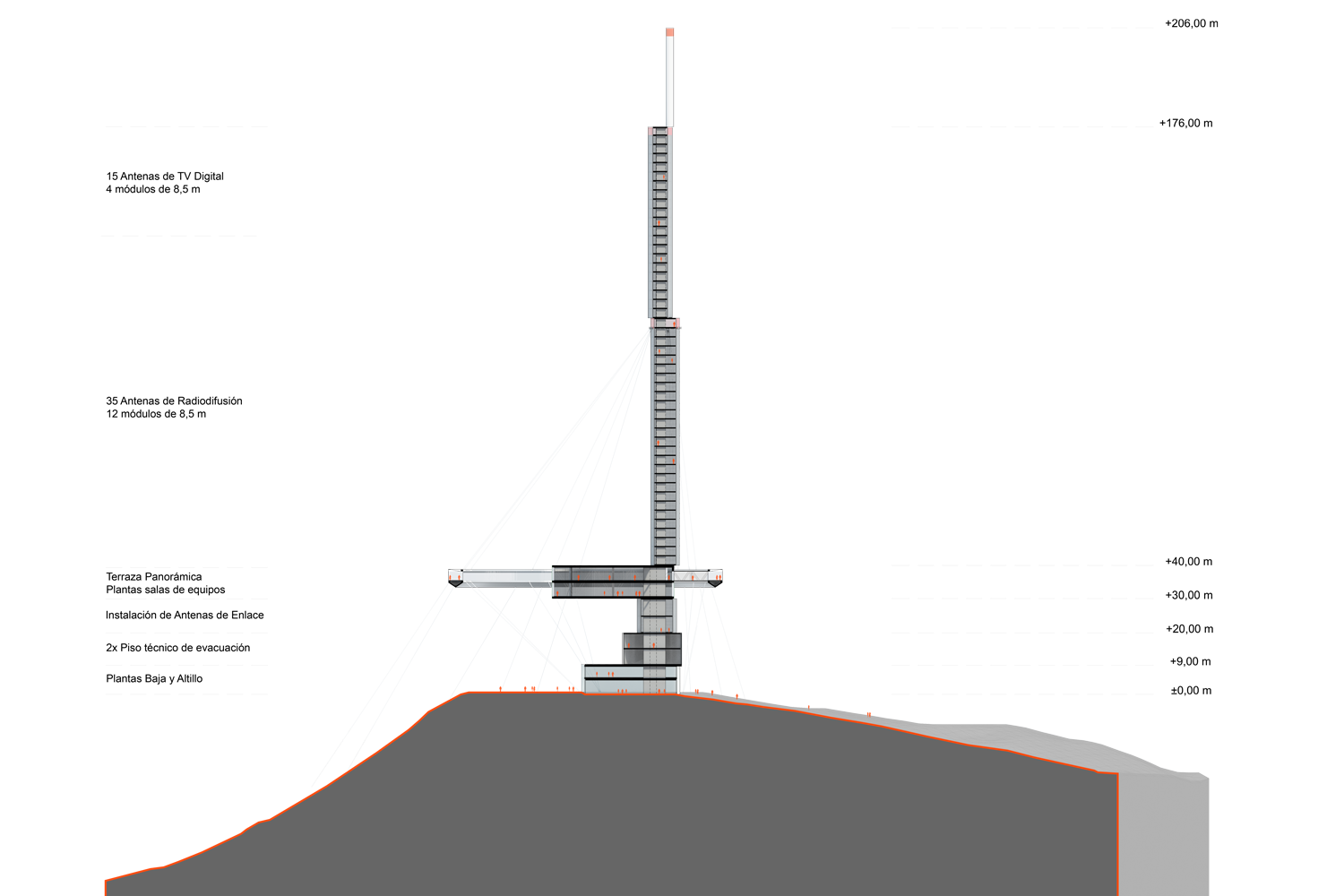 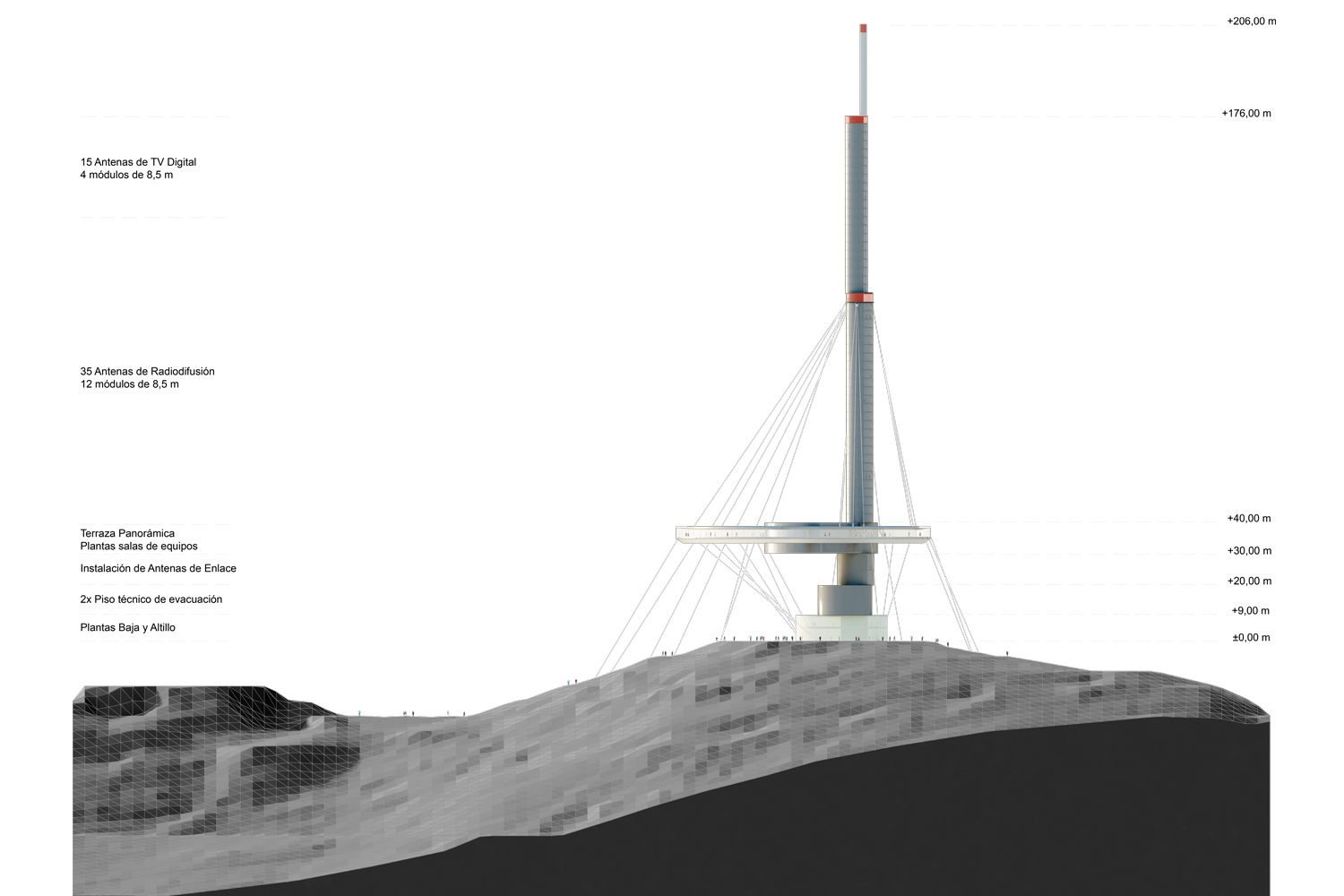 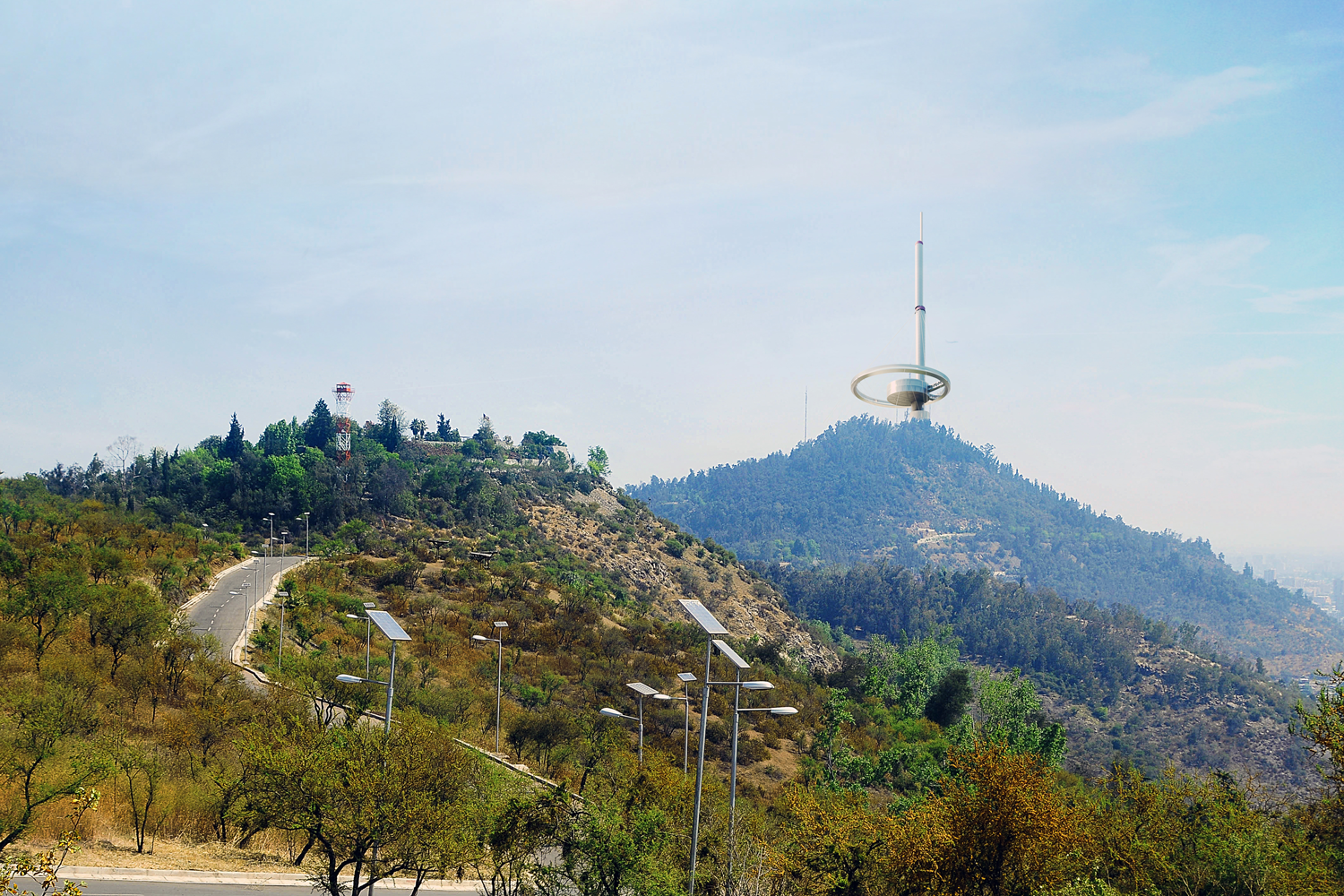 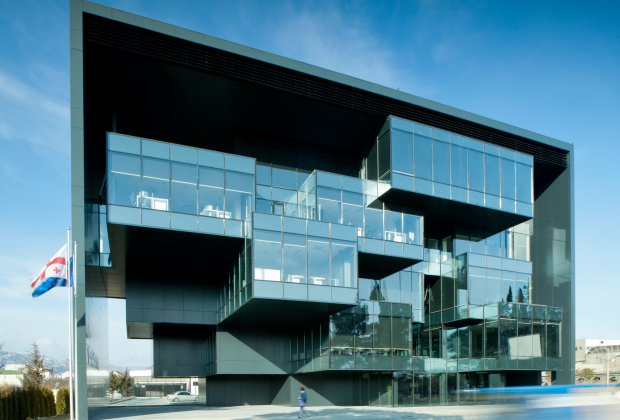 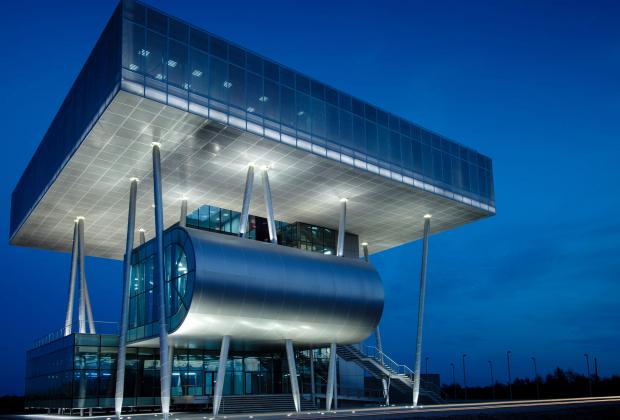 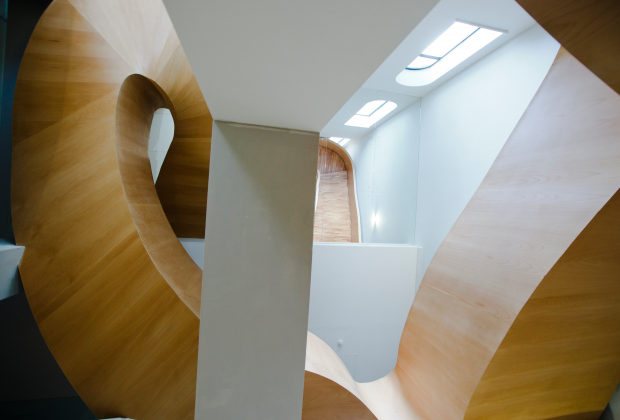 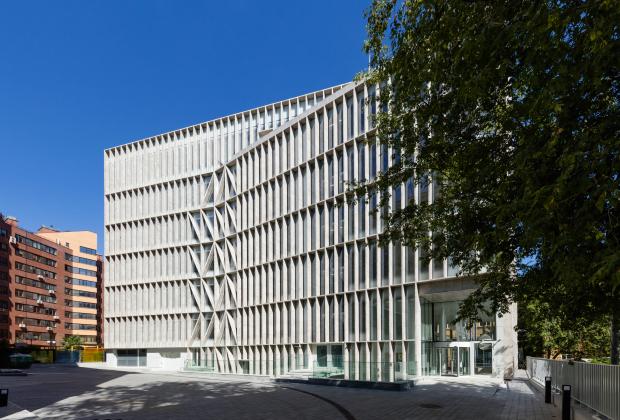 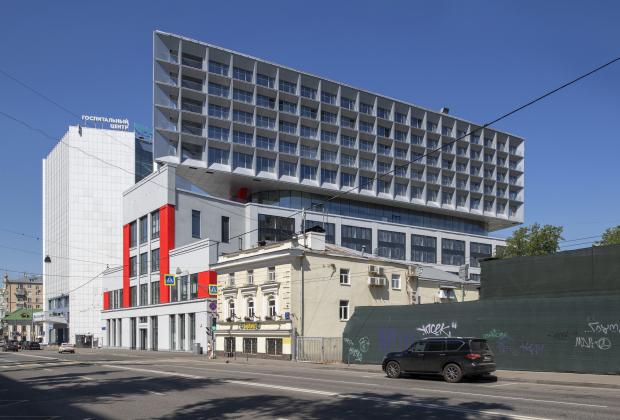 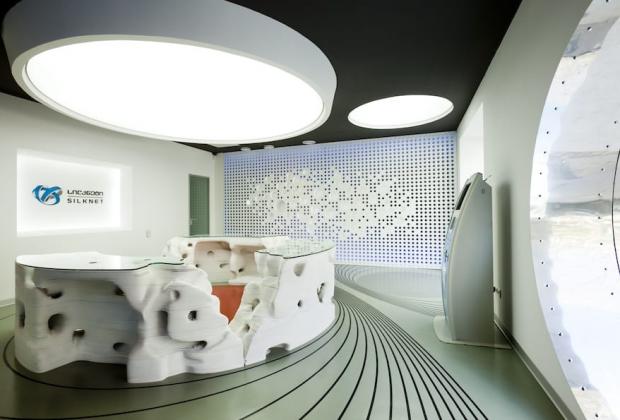 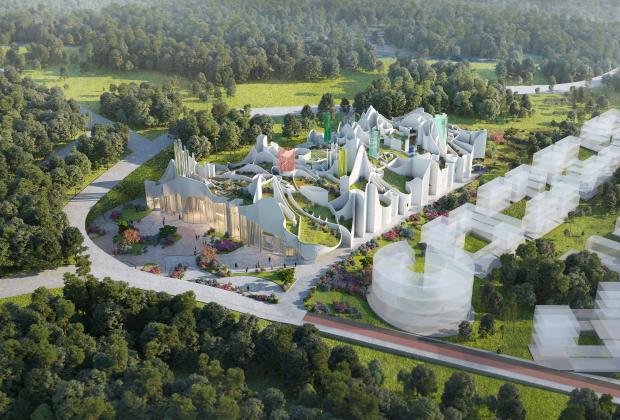 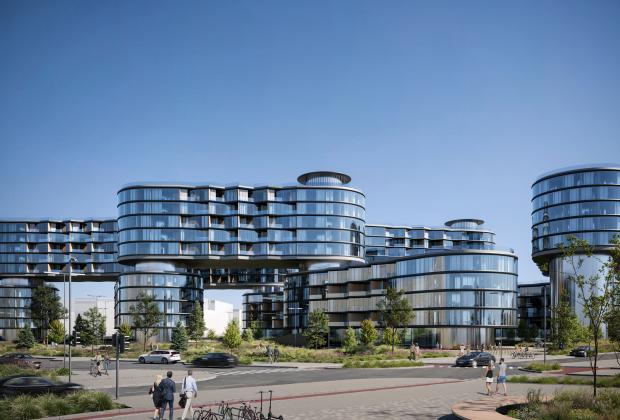 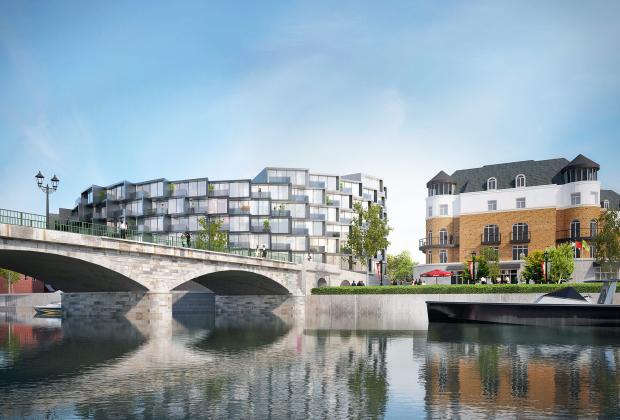 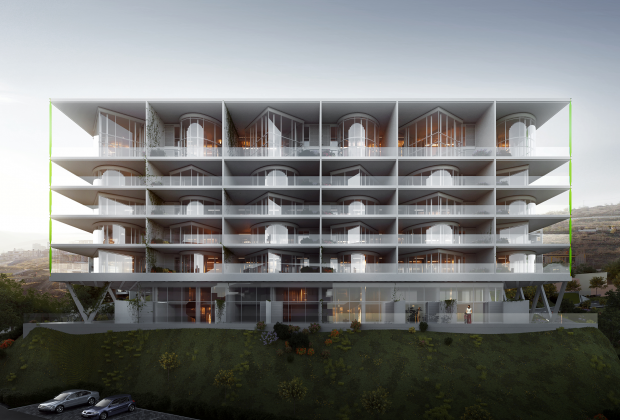 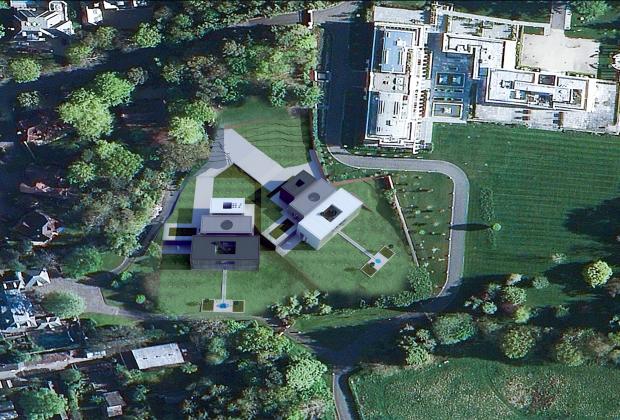 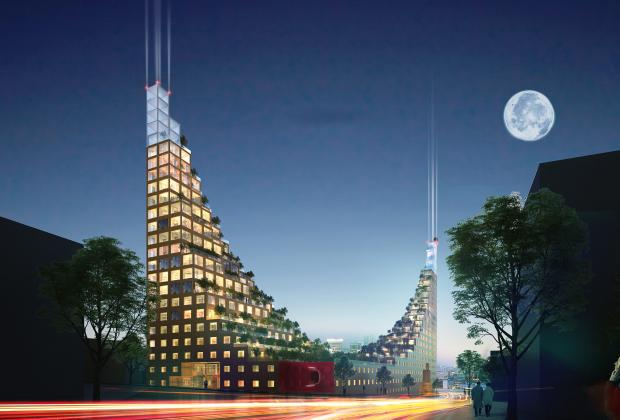 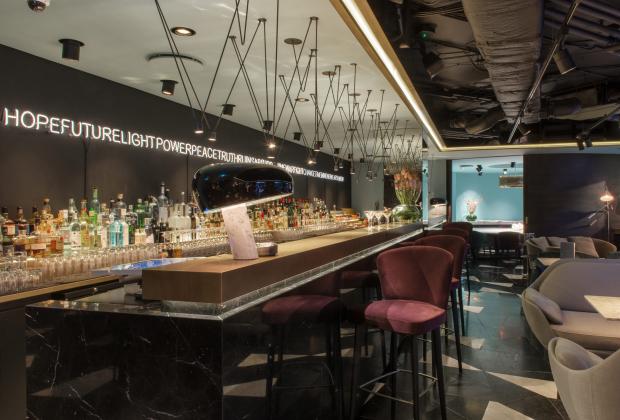